The One in the Two Lands 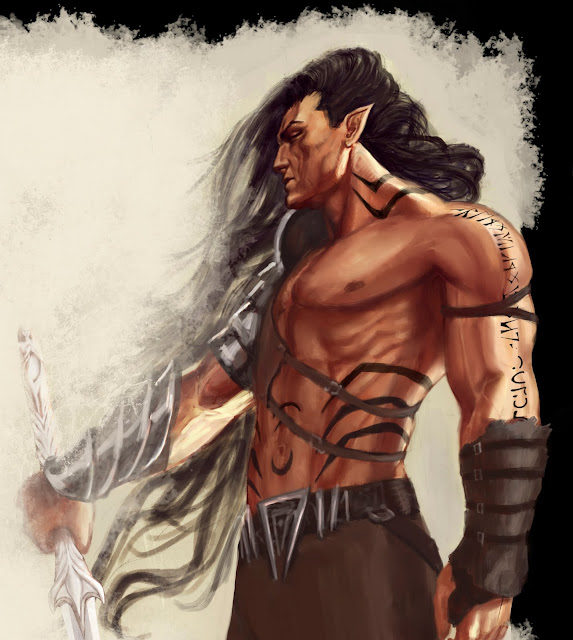 "He was Allwënn. The One in the Two Lands. The son of the enemy blood. Two ancient lineages came together in his veins. Ürull Blood. The most sublime. The  elves from the End of the World, masters of the northern kingdom. Princes among the princes. To them, he owed the beauty of his body, the innate elegance of his demeanor, his arrogance. His cruelty also, why not?. On the other side of the trenches of his heart, his  Tuhsekii blood. The Sons of Stone. The breed dwarf that provided him with fury, strength, passion, honor and tear ...
He was still the half-blood I knew. Fierce and wild. Deep and noble. His destiny had not given him yet the wounds that would marked his whole life. Those cracks that would make him be one like no other. Allwënn that night was still complete. He did not know, he could not imagine, that his legend would begin in the early morning. The price for his soul would be devastating. "
I can not imagine a character with a grater desire to live and exist in this reality than this suicide half-breed. Of all those who I have conceived, he is the only one. It is impossible to control him, impossible to tell him what to do or say. I have never created him. He has chosen me. I still do not know the reason. I am part of it. There is a strange sense of incarnation among us. I know his thoughts as if they were mine. Maybe once were they mine? I admire their ability to endure suffering, from the depths of his gestures and the bestiality of his wrath. Allwënn can sometimes be ornery, hostile, enemy. But he is always authentic and unique. If a writer can admire a character: here you have the writer and this is the character. This story takes his name because it can't not to take it. It talks about a tear and a barely imaginable pain. It talks about feelings cut with a knife. It talks about a wound that never heals. May the gods forgive me for having elected him to offer so much pain. However,  no one but him would be able to live with it and forge his legend too. You will have your reward, my old wolf.
Out here there's a world wishing to know you. Only you can amaze them as once you amazed me. Your half-blood is my blood . It is time for others to know it.
Howl and dance in the full moon nights. In your name, we will not stop howling and dancing .