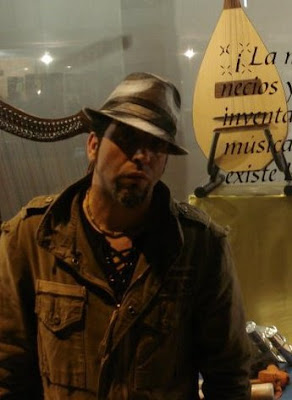 Jesus Barona Vilches (Córdoba, Christmas Eve, 1976) also Jesús Vilches, J.Vilches or just Vilches, as he is known. He also sign as Hatter too. In early literary vocation, he is the author of several books of poetry published in different media in a fragmented way. He begins Drama studies, flirts with theater and radio before being carried away by his vocation as an historian and teacher, he finally graduates in History.

Although he has won some awards and published some tales, his literary efforts have focused for over a decade in building the world of the Flower of Jade, an epic pentalogy with his first two volumes in the national market with great success of critique. The first, "The Envoy", was released in April 2009 and he won with it the Author Disclosure in Fantastic Literature in the 5th Comic Meeting Malaga "Imaginamálaga" 2009. A year later "The Circle Opens" appears as the second volume of the Saga. During this process he moves to Madrid where he is now living, making a strong friendship with Javier Charro, the one who illustrates the covers of these two books. They start to work in the idea of make the horizons of Flor de Jade wider, embarking in a new project: converting the Saga into an "Illustrated Novel Series" wrote to be sold on-line as an e-book.

Disenchanted with the prepotency and contractual abuse of the traditional publishers, he announces at the beginning of 2010 the suspension in the paper publication to focus all his efforts in the on-line e-book project. Since then, they have jumped into the sea with the announcement of a new revised and illustrated material that, according to their blogs, includes not only the edition in e-book but much more additional complementary material as illustrated books, art books, audio-books, original soundtrack -that can be downloaded from the net-. All this totally changes the way of understanding the Fantasy and a project of with this features. He currently resides in Madrid and is involved in the project " Time Malefic " by Luis Royo Romulo and writing the series of novels with which the renowned illustrator seeks to extend its peculiar universe. 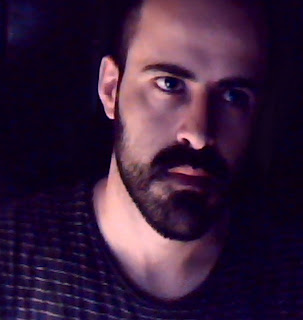 Javier Charro Martinez was born in León in 1980 and he moved to Las Palmas de GC with a few months old. Through his father, a painter in his youth, he started his passion for the art of painting, developed later between the worlds of comics and fantasy illustration.

After working on an animated cartoon made entirely of graphite, in 2003 he began to publish illustrations for RPGs. Since that moment, he starts working as a freelance illustrator, combining it with his degree in Architecture.

In 2006, he settles in Madrid, working as a creative architect in a famous Spanish study as he continues his career as an illustrator. It's in summer 2010 when he finally decides to focus on the latter, starting new projects and taking a larger number of orders.
He counts in his curriculum with more than two hundred illustrations published by national and foreign publishers in different media: novels covers, role plays, letters, magazines and board games, for fantasy , science fiction and horror atmosphere, among others.


Soon you will know more about the projects that Javi and I are preparing and you will be able to link directly to his web space, as this, are changing. 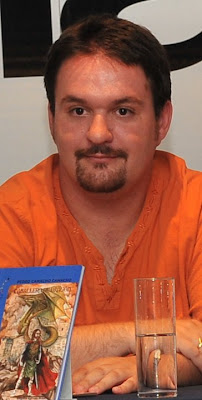 Bio from his website:
" I love reading very much. I would say that I like it rather than writing. I like Fantasy and the beautiful lost Worlds that I'm sure they are out there. I like practicing sports, playing World of Warcraft, watching TV with my wife and enjoy her company. The latter is the most important, because of this I leave it for the end.

I'm a teacher, so I love teaching and children. Of course, English is one of my passions and I enjoy reading a book in the language of Shakespeare from time to time. My favorite writers are, in order: J. Vilches (you will hear of him), David Mateo -Tobías Grumm- and Laura Gallego, although I also read JRR Tolkien -whom I was initiated into the world of Fantasy with-, George RR Martin, Enric Hercé, Rafa Marín, Javier Negrete ...

I have my religious beliefs, of course, but not the usual ones, anyone who may be interested... will have to investigate. This search for the Truth is the reason for my existence, and although it can seem trivial, it is a very difficult but rewarding goal.

I am sure that the world is constantly evolving and whether we want it or not, we will be moving ourselves intro a great family (Mankind, I mean).

I love living in Spain, specifically the area of ​​Bajo Almanzora, where I have my home. I also enjoy the city of Cordoba, perhaps because I lived there for almost three years and because I have great friends. However, the place on Earth where I've ever been best, was Haifa (Israel) in the Baha'i Gardens (by the way, recently declared a World Heritage Place).
I like to consider myself a magician of words, although I have not reached the title of Master. I believe that through my books I can make many people happy, but make no mistake, the happiest person in the world when I finish a writing is me.

There are many things more, but you will have to discover them for yourself ..."

Cassandra
Magic
Cassandra lives beyond the mirrors. No time, no past. With scraps of a future in  her parallel universe. She observes and plays with hatters and painters dolls. Time does not affect her nor conditions her. She knows stories that have not been told, things that have not happened yet. She is the magic when she dedides to probe us the thruth. Her words pick you up to a mirror world, a dreamt, guessed crazy world, where the fouls know how to be right and dreams are blurred. Following her is like entering a cosmos without barriers or borders.  She doesn't exist. She has always been. Under her gaze hours are lost, days are lost, realities are lost. She is two brown eyes that stare what no-one sees and tell with no-spoken words the dreams we have not dreamt yet.