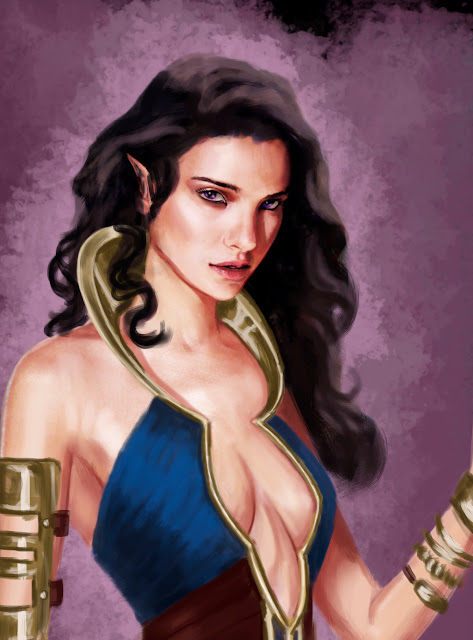 "What is in fact, more dangerous than a woman?
Read Äriel memories first.
I gripped her hand too much.
She looks at her wrist, prisoner between my fingers, swallowing a sign of weakness. Meanwhile, Gharin approaches her by one of her sides. He drags his chair to stay near enough her to propitiate a much more close and personal contact. She realizes it late or she reacts very well to bullying. She faces him with a false charming smile. Gharin's hands do not wait. We have to make a believable pantomime. We have to retain her enough time to extract the information we need without suspicion. Flirtation is the most apropriate mask in this context. Nobody would be surprised if some customer are flirting and enjoying with one of the serving girls.
She looks at me. I have already forced her to sit down with us. It's a worthy, almost proud, way to ask for mercy through her eyes. She accepts to play the game we impose.

Gharin has already started to lay his arm over her shoulders. The game is on and we have taken advantage. I leave her wrist but my hand remains on her hand. I force my smile too. I give my tankard to her, offering a drink as a peace sign.
"Pretend to enjoy the show."

She agree because she has no more chances. She drinks a short sip, enough to wet her lips. She looks at me again. Her eyes shown a thousand of readings. She fakes to be confortable with the situation, to be afloat, not to be scared... but it is not true. She is trembling because I can feel it in my hand touch with hers.
"And now... tell us why this place is not safe."
My fingers starts touching her skin. She sighs and begins to explain the details. She is nervous. Gharin goes on  caressing her. His hands sorround her. She tries not to be overcome. I like her efforts to remain upright, to show she is the one controlling the situation... however, I can feel her concern about our proximity, her alarm because of our hands... but something is making her to stay. A part of her wants to stay. I'm not doing this to enjoy. There are some heavy reasons. I'm not like Gharin, he is enjoying this play.
A trap, a bloody trap. According to her that is what is happening. Using seduction as a mortal weapon. So old... and so twisted. End with a problem inside the blankets. It is a gangs war. A bloody gangs war that is going to paint with blood every bed in this hovel and that has found us in its way. A bloody gangs war. That's all we needed!
I look around while she's speaking. Despite this pressing situation, the representation need more reality. Gharin looks like quite confortable in his role. He is not faking. She is doing it. Our hands disturb her. She can't hide she is not used to men's touching. This is something beyond any doubt. She doesn't mix with men. As a matter of fact, I don't think she has done more than serving tankards and washing the floor. She wants to look like natural, confortable, calm, but her skin gets tense with each rubbing. It's as if our contact was electric. But she has something that beats me and intrigue me. She has revealed us the danger and there is no logical reason to do it. In addition it is her effort to look like strong and that makes her really strong. She has something...


It seems nobody notices what is happening in our table. Everyone is too distracted in their "own businesses" and, as a rule, those businesses also has pretty legs. However, it is only in appearance. Madamme has put an eye on us sometime ago. It's clear she doesn't like us to detain her serving girl. But she is not the only one. There is another girl, very pretty, with a haughty gesture, confident, who is looking at us from the second floor balaustrade where she is shown with the rest of the girls. However, the one who bother me more is a big and well-built guy standing in a corner next to the girls. He bears some scars showing he is a who has made violence as  his way of life. His gaze is predatory. He knows something, he suspects something. I'm putting that girl at risk, but she is the only one who can help us.
I touch her skin and her eyes come back to mine. She goes on talking but my fingers can read beyond her eyes and her body. She make an effort to mantain the coherence in her speech and I... I make the effort for not falling into pieces with her electric touching. I try to pay attention to the seriousness of the situation. I don't know what is ocurring me. She is just a serving girl.
She confesses that she has an weapon when my hands had decided to go for a walk by her thighs. Over her thick skirt but in her groins my hand finds a lost treasure. I touch a dagger pommel, crude but sharp. It is what I was going to find but a part of me regrets having no more excuses to stay on her thighs.
What am I saying?
With a precise movement I remove the weapon from her crotch and it falls down the floor. She feels unsafe. It's necessary. It's necessary. She has been fair. She is a woman of her word. So am I. We allow her to go, thinking she wins but knowing she loose.
Gharin looks at me. The situation is getting worse. I sigh and before knowing how or why my eyes are looking for that serving girl which, when she has arrived to the bar, has centered her playmates attention. She smiles with an odd and sad gesture in her face. She is alone in the middle of a garbage ocean and I don't know why that thing should worry me more than my own fate or my fellow's... but it does. It's the first time this happens to me.
I look at the hard guy that watchs the place, again. He looks at me and then at her. That girl is in danger.
"well?" Gharin is waiting an answer for a while.
"Offer twenty Ares for the girl.
"For the serving girl? Do you want to pick her up to the rooms?" Gharin looks at me as if I was mad. Maybe I am. I should be used to it. Cursed elf. "A night with her doesn't cost..."
"Twenty Ares, Gharin!!" His question enrages me. "I want to make an offer nobody can reject. It's my purse. Get the Madamme allow us to play with her serving girl."
"For that price she allows you to play with the half-orc who is behind the bar. It's too much for one night, Alwënn" he says while he stands up with my purse in his hands.
"It's few money for a life..." but he can't hear that. My voice is swallowed by the frenetic whisper of the place.
I look for her with my eyes.
A life.
I don't even know the implications of what I have just done.
I don't know why I've done it. But I can't not to do it.
Publicado por Tifa's en 7:10