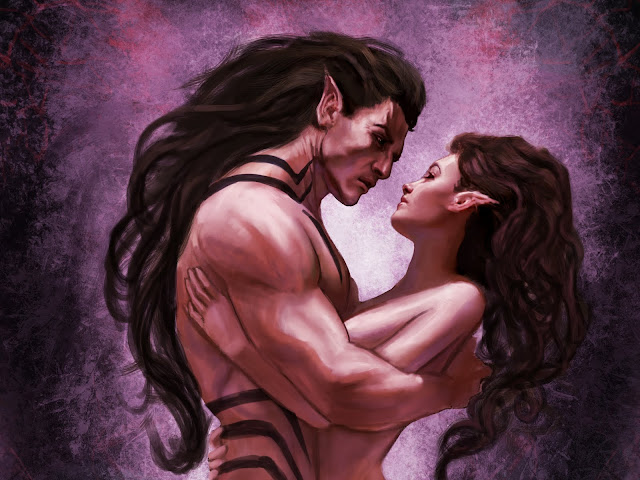 We speak of a birth and  it starts with power.
We want to introduce you "Allwënn, Soul & Sword" the first joint project Charro-Vilches. Also the "Project S & S": the blog where we will post, among other things, the creative process of building this and other similar joint projects that are already running.
The Illustrated-Story:
"Allwënn, Soul & Sword" is an old idea that is born, like all great ideas, around a cold beer mug. In particular, it was in the Prancing Pony in Cordoba, in an afternoon talk show after this writer achieved to have duped a number of people to play live the first chapter of the Flor de Jade Saga. I remembered how my good friend Sito -who has a Tuhsêk Dwarf soul and this saga owes him much-, he told me about doing more short stories about interesting aspects of some characters. Without hesitation I asked what the passage he would like to explore and he said  firmly that Allwënn's past and specifically  his terrible wound  related with his wife.
The truth is that it was a romantic and bloody story, one of those to be told. I got down to work and I wrote it. We could never represent it and it remained in the unfinished tasks drawer. It was then when I toyed with the idea to illustrate it and present it as an illustrated story. We attemped several times and finally it came to be lost to drift again.
It was another person, a very special person and an incredible visionary man who told me: "Speak to Javier Charro. He has a special touch for your characters. Nobody like him connects with them. He is the person."
He was right: he was the person. However, it was not until my moving to Madrid when we could lay the foundation for this work.
Allwënn, Soul & Sword is the first fruit of this marriage between writer and illustrator pressing together. I give my most beloved characters to the magical Charro's hands, and he gives me back a vibrant tale, wrapped in the notes of a lyrical and dramatic story.
For those who know nothing of the Saga, this story can be read independently of the original text of the novels. It has its own end and therefore, thoug it make winks and references, it is not necessary to have read the main books to understand it.
Although it is advanced, the project is not finished yet and we want to share that process with you all.
So we've created the blog: Project Soul & Sword (abbreviated S & S). This Blog will be linked to the saga and will post the process that leads this new journey.
This blog will not only be to house the guts of this book illustration, but it will also be the meeting point for other joint projects that we will gradually reveal; offering sketches, snippets of text, telling you the peculiarities of all that surrounds our work together.
It is an interesting adventure the one we have just started, hiding many surprises that will be revealed during our way. The first drop in a few days.
If you like this space and want to make us the best of favors. If this saga, characters, and all projects around delude you as much as we: tell it, disseminated it, shared it. Talk to us in Face, twitter, tuenti... we already do it. It is important to publicize the initiative. I came here thanks to the love, support and enthusiasm of many people. I'm here because of them. The more we are, the further we'll go.
Pay attention to this because it has just started.
Publicado por Unknown en 13:23